Transitioning to Shot Gun Sequence
Click on the images below for larger versions. 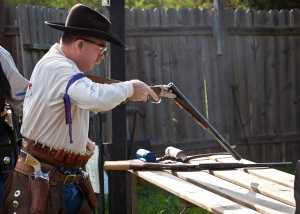 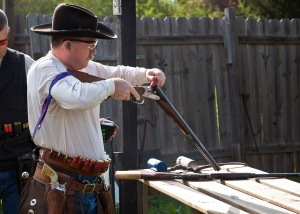 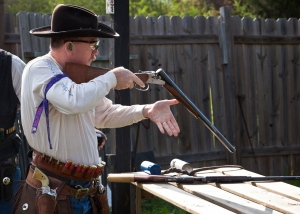 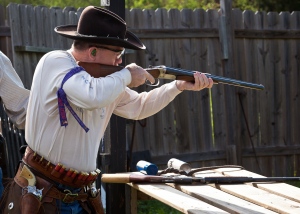 Shot my first match with the Thunder River Renegades in Magnolia, Texas this weekend. Many thanks to John Ross (aka Johnny Morris) for the loan of his daughter’s Marlin carbine!

How the Hell Did I Get Here?
I’ve been searching high and low for a cowboy shooting gun belt that would help me transition from IDPA shooting to cowboy action shooting, with very little luck. Last week I was trawling the Internet, searching through dozens of site and happened upon simple web page from JM Leather in Alvin, Texas right down the road from Sugar Land. I try to buy in Texas if at all possible and the leatherwork displayed on this site was top notch, so I thought, “what the heck?” and sent Johnny Morris an email.

I had an idea in my head for a gun belt with three double shotshell loops on the left, just forward of my left holster (exactly where my spare magazines would be in IDPA) and five single cartridge loops on the right, just forward of my right holster. I really hate the thought of wearing a gun belt and separate shotshell belt and just wanted something simple, clean and light-weight. Johnny’s All-In-One Belt was the closest thing I’d seen but I wanted the buckle facing forward.

After a few emails back & forth, I asked Johnny if we could get together to discuss the project and he suggested I come and shoot this weekend with the Thunder River Renegades in Magnolia. Talk about “customer service”. Not only had I found someone local that did high-quality leatherwork, I’d also found someone to shoot with. Johnny even loaned me his daughter’s Marlin since my Rossi 92 is still being worked on. I don’t remember anything like this ever happening in IDPA.

A Case of Nerves
There’s nothing quote as nerve racking as your first time out in a new shooting sport. You walk up to that line. I remember vividly the first time I shot IDPA and darn near dropped my magazine on the first reload. The buzzer goes off and all those months of dry-fire & live practice got right out the window. Adrenaline kicks in and your once nimble fingers feel like you’re wearing a catcher’s mitt. You silently pray “Oh Lord, Don’t Let Me Drop This Gun”.

My first experience in cowboy action shooting was somewhat similar but with a really big difference, the people! The folks at the Thunder River Renegades couldn’t have been nicer or more helpful. Johnny hooked me up with Rawhide (in cowboy shooting, you are your alias) who ran me through the basics and checked me out on range safety, course etiquette and sweep definitions (we’ll cover these in detail later). He had me load each firearm (rifle, pistols & shotgun) and let me get my first taste of shooting steel plates. This type of immediate feedback sure beats trying to see a hit on an 8″ perforated circle in IDPA, let me tell you!

Once the stage began I waited my turn at the loading table and tried not to let the butterflies in my stomach carry me off. What’s to worry about? It’s just two pistols (single-action), a lever-action rifle I’d borrowed and a coach gun that I’d slicked up myself. The Timer said “Next Shooter” and I thought to myself, “Oh Lord, What Have I Gone and Done?”.  I stepped up to the platform, staged my rifle and shotgun and waited for the Timer to say “Shooter Ready”.

The buzzer sounded and I grabbed my rifle, brought it to my shoulder, levered a round into the chamber and squeezed off my first shot in cowboy action shooting. A clean miss! The Posse Marshal calls out “High” as I send another shot over the second steel target. I adjust my aim almost 8″ lover and am finally rewarded with that most beautiful sound in cowboy shooting, “Clang”. I continue shooting each target: “Clang”, “Clang”, “Clang” until the rifle is empty. I set it down and move quickly to the pistol targets, drawing my left revolver as I move towards the second position. “Clang”, “clang”, “clang”, “clang”, “Miss”. I draw my right revolver and cleanly sweep the same group of targets. I move toward the third position while holstering my revolver with my right hand and grab two shotshells in left hand.

I grap the shotgun just as I’ve practiced and load two shotshells, bring it to my shoulder and fire off my right barrel. I hear the “Clang” and the Timer says “Down” (shotgun targets have to “fall”, not just get hit). I quickly let go with my left barrel and hear that beautiful “clang” once again. I break open the coach gun, dump the spent shells just as I’ve practiced and grab another two from my belt. That’s when my nerves kick into high gear! I bring the two new shotshells toward the open barrels and miss both openings. After what seems an eternity, I load the two shotshells and open fire on the last two targets. “Clang”, “Clang”, Done!

I grab my rifle & coach gun and walk to the uploading table with a big grin on my face and a sense of wonder. What took these seven paragraphs to write happened in less than forty seconds of “real time”. The next four stages went just as fast and I shot one of them “clean” and with a decent time.

Some Great Shooting
Cowboy action shooting events bring out the best in people and bring out the best shooters. This young lady, “Hey You” is a Ladies Traditional Texas State and Southwest Regional Champion. Watching her run that lever-action rifle with nary a miss was a joy to witness. Like all the folks I’ve met in this shooting sport, this young lady was enthusiastic, polite and friendly to everyone in the match. Unlike some other shooting sports, folks that come to a cowboy match seem to leave their ego’s at home. I’ve honestly never met such a warm and friendly group of folks before.

My thanks to Johnny, Rawhide, Miss Ellie and all the rest of the Thunder River Renegades for making this a weekend to remember. See you next month!

The “Coach Gun” is probably the most widely used firearm of the late 1800’s. Pioneers, settlers and lawmen alike relied on the double-barrel, side-by-side shotgun for everything from putting food on the table to close-quarters combat. The modern slang “riding shotgun” can be traced back to the days when stagecoaches played a big role in transporting people and cargo to destinations the train didn’t reach. The rough and tumble frontier of the “Old West” was such that these trips often necessitated a guard toting a short-barreled shotgun up front with the driver. Anyone that’s ever watched a John Wayne Western movie has seen just how effective the coach gun was back in the day.

Copyright © 2011 Stoeger Industries
Click on the image above for a larger version.

Today, the “Coach Gun” has found new life for both home defense and Cowboy Action Shooting. The most common shotgun for SASS shooters is the Stoeger Coach Gun at 6-1/2 pounds with a pair of 20-inch barrels. The Stoeger Coach Gun is a simple, effective tool for cowboy shooters. The barrels are short enough for quick handling and its break-open design allows it to be used by shooters of all experience levels. It’s also one of the most fun firearms I’ve ever shot!

View the video above for more information.

Originally developed as traditional, double-trigger models for Cowboy Action Shooters, the Stoeger Coach Gun now comes in single-trigger models for an even faster second shot. They are chambered for 2¾- and 3-inch shotshells in both 12 and 20 gauge and are offered in blued finish with traditional satin-finished walnut stocks. The new top-of-the-line  Coach Gun Supreme also features a blued finish with a corrosion-resistant, stainless steel receiver and stock made from AA-Grade American Walnut. Both 12-gauge and 20-gauge Supreme models come with improved cylinder and modified screw-in choke tubes and a choke wrench.

You can learn more about the Stoeger Coach Gun in Captain Baylor’s great article Getting Started in Cowboy Action Shooting or by watching the video reviews from The Truth About Guns.

I’ll also be posting an article in the coming weeks on how to slick up your Stoeger Coach Gun for cowboy shooting with the tools you already own. So stay tuned!